We recently picked up a new developer named Runic that had started off by submitting some great patches to the BZWorkBench project. Since been given commit access, he’s added and fixed a good number of things. Here is some screenshots: 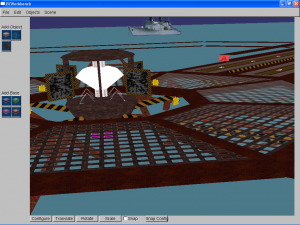 Some of the objects don't show up properly, but it looks way better than it used to. Previous to Runic's fixes, I think everything showed up white.

I’ve been sitting on the bzflag.mobi domain for a couple years now, and I finally have something halfway useful up. It lists what users are currently on a BZFlag server. It pulls data from the official BZFlag stats site, so there’s a delay between updates of around 5 minutes.

The “online” page might be a bit too large for some phones, as it pushes a little past the W3C’s recommended markup limit of 10KB. I’ll try to cut that down a bit, and then make it look a little better. I may at some point have interfaces customized for certain devices, like the iPhone/iPod Touch, but don’t count on that…

The current goal is to allow registration, and then players would be able to add friends/foes to their list and quickly see if they are online. If anyone can thing of other features that would be useful, please let me know!

Coined as “This isn’t the release you are looking for”, BZFlag 2.0.14 has made an appearance. You can download it from SourceForge for Windows and OSX. Source code is available, so those on Linux and BSD can download the code and compile it.

The primary reasons for this release were to correct some font licensing issues and to get 2.0.13 out of the Debian and/or Ubuntu package repositories. Version 2.0.13 made it’s way into both, which should not have happened – the odd number means it was not a released version, but a development version. This new version probably won’t make it into the next Debian stable, but we’ll see.

There is also a good number of other minor fixes. You can view the Change Log to see all of the changes. Windows users will want to make note of the changes in 2.0.12 as well, since they’ve been on 2.0.10 before this release.

A couple other changes include a fix for reloading bans via a plugin, such as what serverControl does. In the past, players that were caught in a ban but were white listed would get kicked off when a server plugin reloaded the bans. This has been fixed in 2.0.14’s server. Another fix includes server-side checking for users running autopilot. Before it was possible to enable autopilot during the join process even if the server had disabled the functionality, but this should now be prevented.

Doesn’t really have much of an effect yet, but the CPU in my server was upgraded about 30 minutes ago from a single core Celeron D 2.53GHz (256KB cache, 533MHz FSB) to a dual-core Pentium D 3GHz (4MB cache, 800MHz FSB). Now I just need to find something to do with all of that power! Rawr!

I am currently testing a few minor change to the Missile Wars 2.3 map. This is the map that I host at BZExcess.com port 5154. These changes are:

Those last two changes may not stay. I haven’t yet decided if that is the best solution. Also, I accidentally left in some additional Cloaking flags on the base. This was the method I was originally going to use to help prevent spawn killing. I may leave them in and then take out the above two changes.

Please feel free to leave some comments either here on the blog or by another form of contact.

Edit Dec 10, 2009 7AM: I temporarily removed the new way that tanks and the team flag spawned. I also swapped the bouncy flag for an OO flag.

I’ve been toying with the idea of a plugin that can control various aspects of the team flag in CTF mode. Well, as of today, I have the first release of that plugin available. It’s pretty basic so far. Currently it only has one feature. It can control where the team flag will spawn. A new object of type ‘teamflagspawnzone’ will need to be added to the map. A lot more detail is available in the README file provided with the source. You can download the plugin in the full article.

END_OF_DOCUMENT_TOKEN_TO_BE_REPLACED

A few days after posting the Windows build of BZWorkBench, I was able to fix the build on Linux. There are still some issues with building on Mac OSX, but I can’t debug that as I don’t have OSX. Anyway, here are the steps for compiling on Ubuntu 9.04. It should be similar for other distributions. Instructions are in the full article.

Here’s an example with HiX loaded: 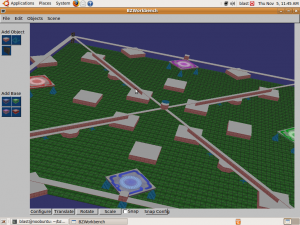 BZWorkbench on Ubuntu 9.04 with the HiX map loaded.

END_OF_DOCUMENT_TOKEN_TO_BE_REPLACED

For those of you on Windows who want to try out the latest revision of BZWorkbench (the map editor that has been created over the course of two Google Summer of Codes), then I have a binary package up. There’s no installer – it’s just a zip file containing the files. This is built from the stock SVN revision 20544 code. You will also need the Visual C++ 2008 SP1 runtime, which I have linked below as well.

There’s probably still lots of issues with it, so please report them to the official BZFlag bug tracker. Also note that as of this revision, building BZWB on Linux and OSX doesn’t seem to work.

Here is another example of what BZFlag 3.0 will be able to do. I had posted an example that shows the last player to join on an object in the map. Well, a meteorite has been working on a plugin and map file that blows that out of the water. It’s a whole scoreboard! (Update: a meteorite is only writing the plugin, not the map.) 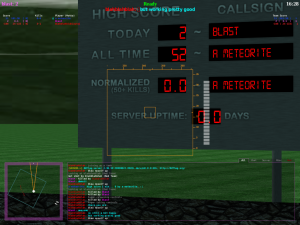 Close up of the scoreboard. 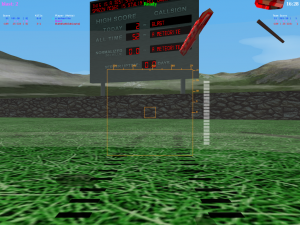 Another view of the scoreboard.

Spazzy McGee has been working on a (yet unnamed) map. It will utilize some of the new features available in BZFlag 3.0, and therefore won’t be released until that new version of BZFlag is out. For example, it makes use of the new ability to make any mesh face act as a base. It has round team bases! Woot! The map looks great and I can’t wait to try it. He made a video that shows it in action.

Really cool stuff! You can find out more at the BZFlag forum.