I was a bit bored today, so I started playing around with the new “text” object in BZFlag 2.99.x. (For those of you who don’t know, 2.99.x is the development version that will become 3.0.0 when released.) Because of the new font engine in the game (FTGL) we can pull in any TTF font and use it in the game. The text object uses this same font engine. It can pull a font file from a web address, as well. You can then position the text anywhere in the map. I’ve already seen an example from the Planet Mofo crew that was a scoreboard of the top players on the server. My example won’t be that cool.

Here is what it ends up looking like. Hard to see in the thumbnail, so click on it for full size. 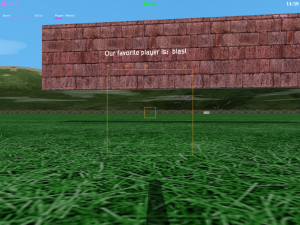 Sample of the NewestPlayer plugin in action.

I have the plugin and world file posted as well, so click on over to the full article.

The plugin code is dead simple. It only has one event, so I didn’t need much code. I also have the map file itself here.

I can see this object having huge possibilities, and I look forward to seeing what map authors do with it!

One thought on “New Feature Coverage: The text object”